The intensifying red-tagging activities by security forces against activist organizations, including trade union and labor organizations, is not helping the Duterte administration repudiate the country’s shameful designation as one the most dangerous places for workers. For the nth year now, the Philippines has been consistently on the list of International Trade Union Confederation’s Top Ten countries that are dangerous for workers. As a matter of fact, the unsolved killings of some 50 trade union organizers, the none to very slow progress in the conduct of their investigations, and the government’s obstinate denial of entry to International Labour Organisation’s High Level Mission to inquire into this matter, further bolster the presumption that all of the above fall under a state-sanctioned policy of repression and executions.

For what makes official government action truthful and sincere against trade union repression is to see tangible resolution of those cases rather than a mounting body count of victims and the intensifying vilification of human rights which include among others, the freedom to organize, express dissent and even conduct legitimate concerted actions. Hence, we, the Philippine affiliates of the Council of Global Unions, find it as utterly abhorrent seeing the country’s policy environment getting harsher rather than improving. 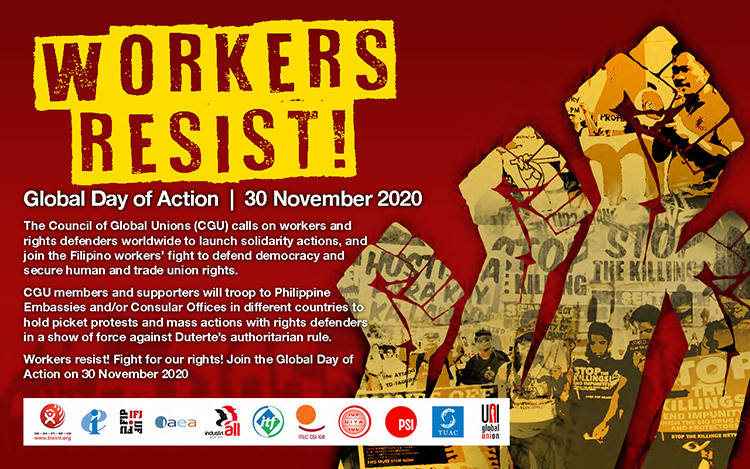 There will be protest actions in Sydney and Perth on November 30:

It is for this reason why trade unions and labor organizations, together with many other civil society and human rights organizations, are fighting tooth and nail for the scrapping of the anti-terrorism law (ATL) and its Implementing Rules and Regulations (IRR) as it endangers civil liberties. While many sectors say the ATL is a misplaced priority amid the pandemic, we in trade unions see it less as a distraction but more as a systematic way of installing authoritarianism at a time democracy is weak and economic crisis is deepening.  We further believe that the unabated killings, the establishments of Joint Industrial Peace Concerns Offices [of the Philippines National Police – established to promote ‘industrial peace’ and for ‘defense from radical labor infiltration of the labor force’ – ed]s in [Special Economic Zones, called] ecozones, and the enactment of the ATL as interlocking instruments of repression.

Furthermore, this depressing policy environment also occurs along with the growing influence of new powers like China over the country’s economic affairs. National sovereignty is now a challenged territory, while workers in contending countries are made to suffer under the same repressive and unprotected environment. New trade agreements skewed in favor of Transnational Corporations and new regional powers are being rolled out, thus, attempts at overhauling the Philippine constitution and relaxing domestic rules on labor and the economy never stop.

The pandemic has only worsened old problems while creating a new mountain of crisis. But these are challenges that we insist must be addressed in a manner that is humane and democratic, not in the obtrusive way it is being handled today. We are facing the worst unemployment and underemployment problem in recent history, aggravated further by devastations from recent calamities; thus, it is jobs, aid, guaranteed income, universal healthcare, and trade union and human rights that should occupy policy spaces and crises responses of the government. Killings, red-tagging, and enlarging repressive powers will never be the antidote to these crises. As draconian policies, they will rather divide, destroy, and prevent the healing of this nation.

On November 30, under the theme “Trabaho, Karapatan, Kaligtasan, Pananagutan” (Jobs, Rights, Safety, Accountability), the global unions will be coming together for a Global Day of Action in solidarity with Filipino workers who face intensifying attacks against their rights to freely associate, collectively bargain, express themselves and seek redress to their grievances, and, most importantly, to their right to life.

In particular, the global unions demand the Philippine government to carry out the following actions:

Likewise, the Council of Global Unions (CGU) is demanding attention from international bodies like the UN/International Labour Organisation (ILO) to come to the defence of the Filipino workers and all the suppressed workers of the world. The ILO Convention 190 which seeks to eliminate violence and harassment in the world of work is an important instrument that should be adopted and put into practice by the Philippine government. The ILO’s High Level Missions must be pressed to proceed alongside investigations into the country’s compliance to the GSP Plus trade arrangements [with the European Union], among others. ###

THE KILLING OF DENNIS SEQUENA

This is a presentation made by the Labor Party in the Philippines to a webinar organised by the Council of Global Unions on November 23, 2020.

The grim state of labor rights in the Philippines was highlighted with the fatal shooting of a [Labor Party, Partido Manggagawa] PM veteran union organizer in the biggest export zone in the Philippines. Dennis Sequeña was killed on June 2, 2019 while in the middle of a labor rights seminar and in front of workers from the Cavite Economic Zone [ecozone]. Colleagues in the labor movement honored him with being a “hero of ecozone workers” for his two decades-long advocacy, and fight for decent work and freedom of association.

The government has formally declared his shooting as labor-related and an extra-judicial killing. The case has been lodged at the Department of Justice since August last year but nothing has moved since then. More than a year after his brutal killing, justice has not been served, his killers remain at large and impunity reigns in the Philippines.

Outraged at the murder of Dennis, local and international groups including the International Trade Union Confederation called to task the Philippine government. At the International Labor Organization’s (ILO) annual conference last year, the Committee of Application of Standards tabled the Philippines for violations of Convention 87 and 98 on freedom of association and collective bargaining.

All of these highlight the plight of workers in the export processing zones and the challenges of observing labor rights in these gated complexes. Around a million factory workers are employed in the economic zones and industrial estates, excluding another one million employees engaged in business process outsourcing (BPO) services which also enjoy status as ecozones and likewise benefit from incentives and tax breaks. Most of these workers are in firms producing electronics and garments for export. Majority of them are female given the preference for women workers in these two industries.

Historically trade unionism and collective bargaining have been the mechanism by which workers have won improved wages and better working conditions. But unionism is actively discouraged if not virulently suppressed within the ecozones as illustrated by the killing of Dennis and others. By repressing the right to unionize, bargain and strike, labor is kept cheap and docile.

As part of the supply chain of multinational companies, many of the locators in the ecozones compete by leveraging lower labor and production costs. Thus decent working conditions are an issue because of the global race to bottom in wages and working conditions. International solidarity is therefore the answer and an imperative.